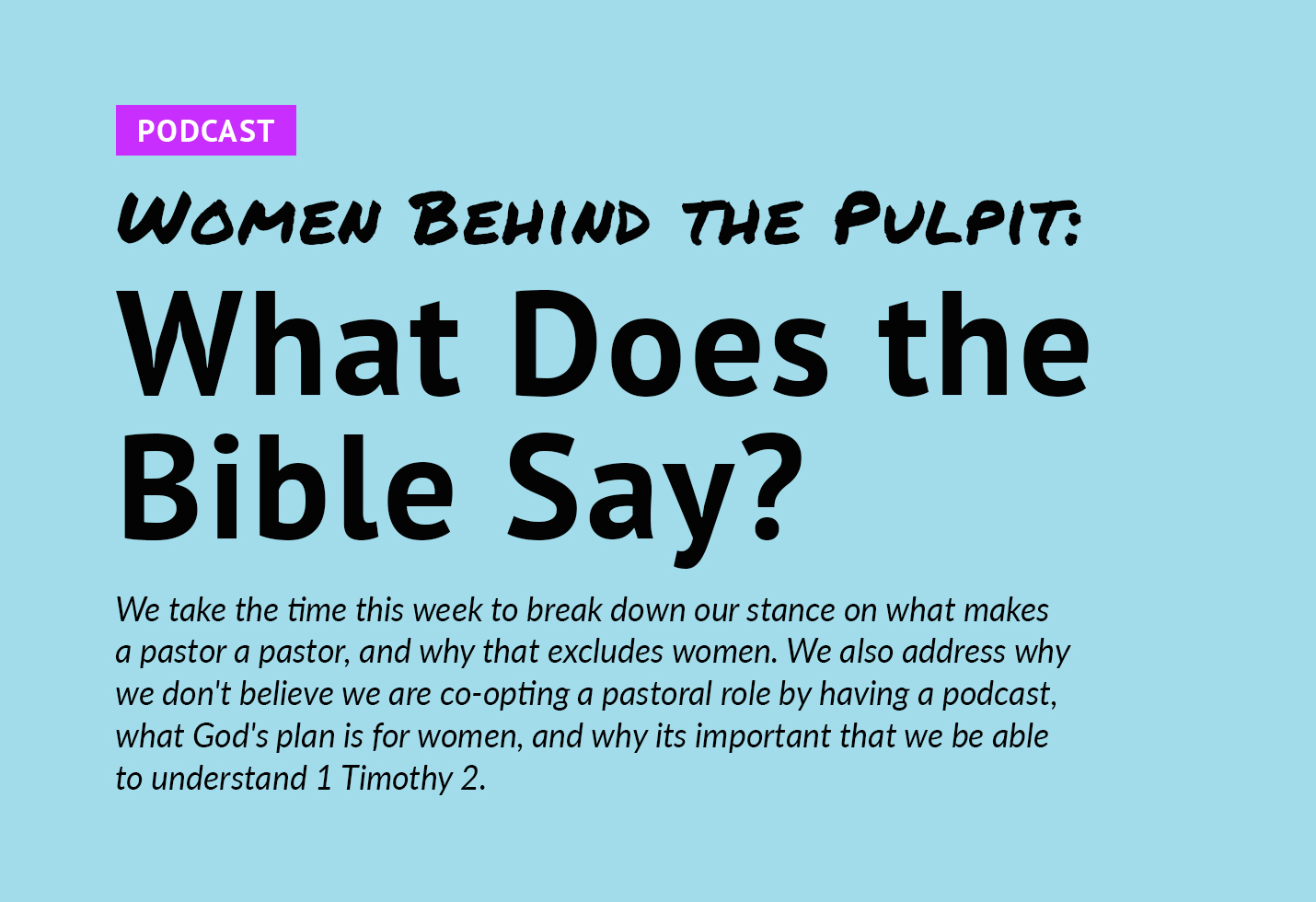 Download Episode
We do not believe that women can be pastors because Scripture tells us as much. But let’s be honest, a lot of us hold to this view “because Scripture says so.” Scripture simply saying so is absolutely enough of a reason for us to follow suit, no questions asked. While we believe that wholeheartedly, in the very gender-confused and feminist-saturated culture we live in, it is not enough to know what you believe—you must also know why you believe it. So that is why this week, we are taking a very short amount of time to explain the why’s, and answer some common objections.
Remember, being reactionary and irritated is not strength—it’s weakness. No, we don’t believe that women are worth less than than men because they are not called to be pastors. In order to believe that, you must believe that being a pastor makes you worth more in the church, which is a lie, and very possibly exposes idolatry. The reality is that the knee-jerk “you just don’t think women are valuable” argument is intellectually lazy. The church has not held to this view for millennia because it slipped and chose not to have a strong hermeneutic on New Testament passages related to women’s roles, despite having a robust history of being very concerned with handling the text accurately. In fact, Paul appealed to the Creation order laid out in Genesis to make his case in 1 Timothy. As Tom Ascol points out for us:
“The order of creation and the order of the fall provide the reason that women are not to exercise authority over men in the church. From the beginning God has intended that men lead in the home and in the church. This is no slight to women. It is God’s wisdom commanding what is best for His people and His world.”

6:50 This isn’t something we should defend based on tradition only—we should know what the Bible says about women’s roles in the church and why.

10:01 Equal standing before God doesn’t mean there are no distinctions between genders and gender roles.
11:10 What is the context of, “I do not permit a woman to teach or to assume authority over a man; she must be quiet”?
13:50 If you think of eldership as the ultimate occupation, the only and best way to glorify God, there’s a component of idolatry there.
15:29 Why do we have a podcast if we hold to this view?
17:58 No, we don’t believe women are worth less than men.
20:00 Answering common objections to a traditional interpretation of 1 Tim 2 regarding women.
31:28 So, what should women do in the church?
38:10 Stick with us, because although we aren’t Greek scholars, the language of the original text here is rather important. Here’s a quick thing that’s worth noting about it.
41:00 What does, “she will be saved through childbearing” mean?