The (in)Sanity of the Gender Binary

Buzzfeed produces high-quality videos. If it wasn’t for Buzzfeed, I never would have found the biscuits and gravy recipe I made for Father’s Day (which, by the way, was delightful, I highly recommend).

Buzzfeed is, in my estimation, one of the most excellent mirrors of people my age: they are always there with a breezy post about something in the news, they produce perfectly hilarious quizzes, they exploit our love for Harry Potter and Leslie Knope, and that Chipotle recipe menu? What a dream.

Besides always knowing how to slay with a perfectly timed Ron Swanson meme collection, they are also unapologetically wicked.

Exhibit A: Their video, “I Am A Gender Non-Conforming Parent”

I love this video, really and truly. Once the sadness dissolves, once you can finish grieving for sweet Atticus and the child abuse that is just part and parcel of his every day, take heart in this very sweet truth: the truth remains.

The whole point these two women try to make is that gender can be whatever you want it to be, but not only do they fail to prove their point, they succeed in proving the opposite.

In the midst of acknowledging that certain things belong to a masculine category and that certain things belong to a feminine category, and allowing herself to be a more masculine person freed her to be who she “really is”, her partner says, “My understanding about gender is that ultimately it doesn’t mean anything. It doesn’t give you that information about that person that you think it’s going to give you.”

So which is it? You can find yourself through expressing the gender you feel you are, or gender doesn’t give you any information about who you are at all?

Dashiell goes on to say, once her partner became pregnant via donor, that people would always ask, “Are you having a boy or a girl? Whatever that means.” 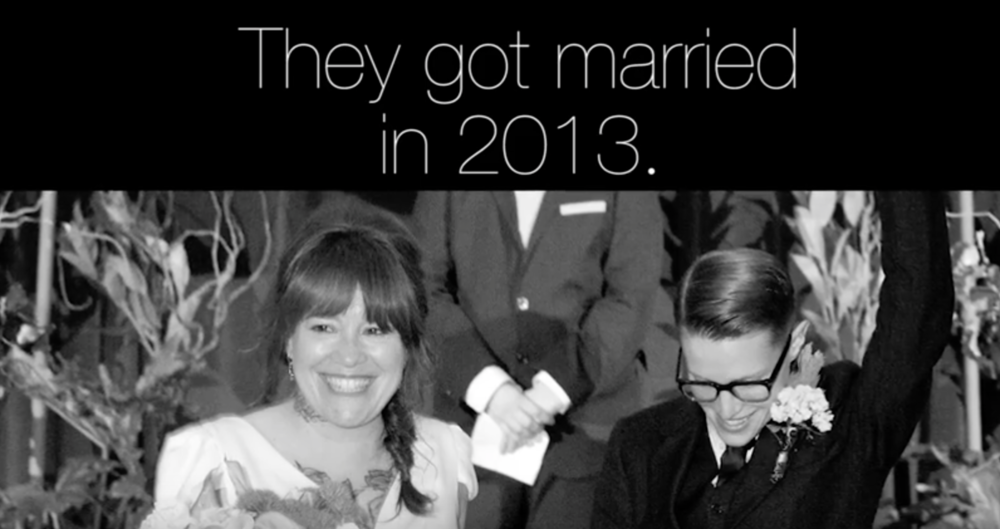 What do we see in this picture? Is it hard to tell that this is supposed to be a picture of a husband and a wife? Why is it, if gender is something to be non-conformed to, that one person here is clearly assuming a feminine role and one is clearly attempting to assume a masculine role?

Michelle, the one who takes the feminine posture in the relationship, explains how amazing it is that their little boy is athletic. That he likes to romp. She describes him as potentially an Olympian in a past life–and that these talents just “came with” him. She attempts to “queer” her relationship with him by getting him to wear tutu’s and “he hates it.”

Hmm. So, gender is a social construct, but the way they describe their son, it’s as if they have stumbled upon a truth they can’t even get around. You’d think maybe his masculinity is something he was even BORN with from the way they talk about it! And apparently, no amount of abusive tutu-forcing seems to be able to change HIS little mind.

Dashiell and Michelle join a moms group. Dashiell expresses concern over whether or not there will be any dads there. I think I can help her with that one, since the fact that its called a “moms group” makes it somewhat exclusive to, you know, moms….but if gender is something not to be conformed to, then why worry about what genders will be there at all? Over and over and over neither of these women can escape the reality of the gender binary.

What’s encouraging to me about this video? Well it is, of course, that Dashiell and Michelle are made in the image of God, and they cannot escape the truth. They may be sitting on a bench in front of a white wall and be smiling back at us and promising us up and down that the wall isn’t real, and if the wall was real it would be bright chartreuse anyway, but they are unconvincing. They cannot avoid the imago dei. They cannot avoid the wall and the fact that it is white any more than they can avoid calling their son “he” or ascribing a gender binary in their own relationship.

They may try not to “conform” to reality but they are utterly unable to escape it. I love this video because it exposes the complete insanity of their worldview and they do it with their own lips.

There is a non-conformity that Dashiell and Michelle are welcome to, and it’s non-conformity to the things, the perverted passions, the confusion, and the insanity of the world’s foolish hearts that have been darkened. Pray for them. Pray for their son. And be encouraged: they know the truth.