This is Not the Modesty Blog You’re Looking For 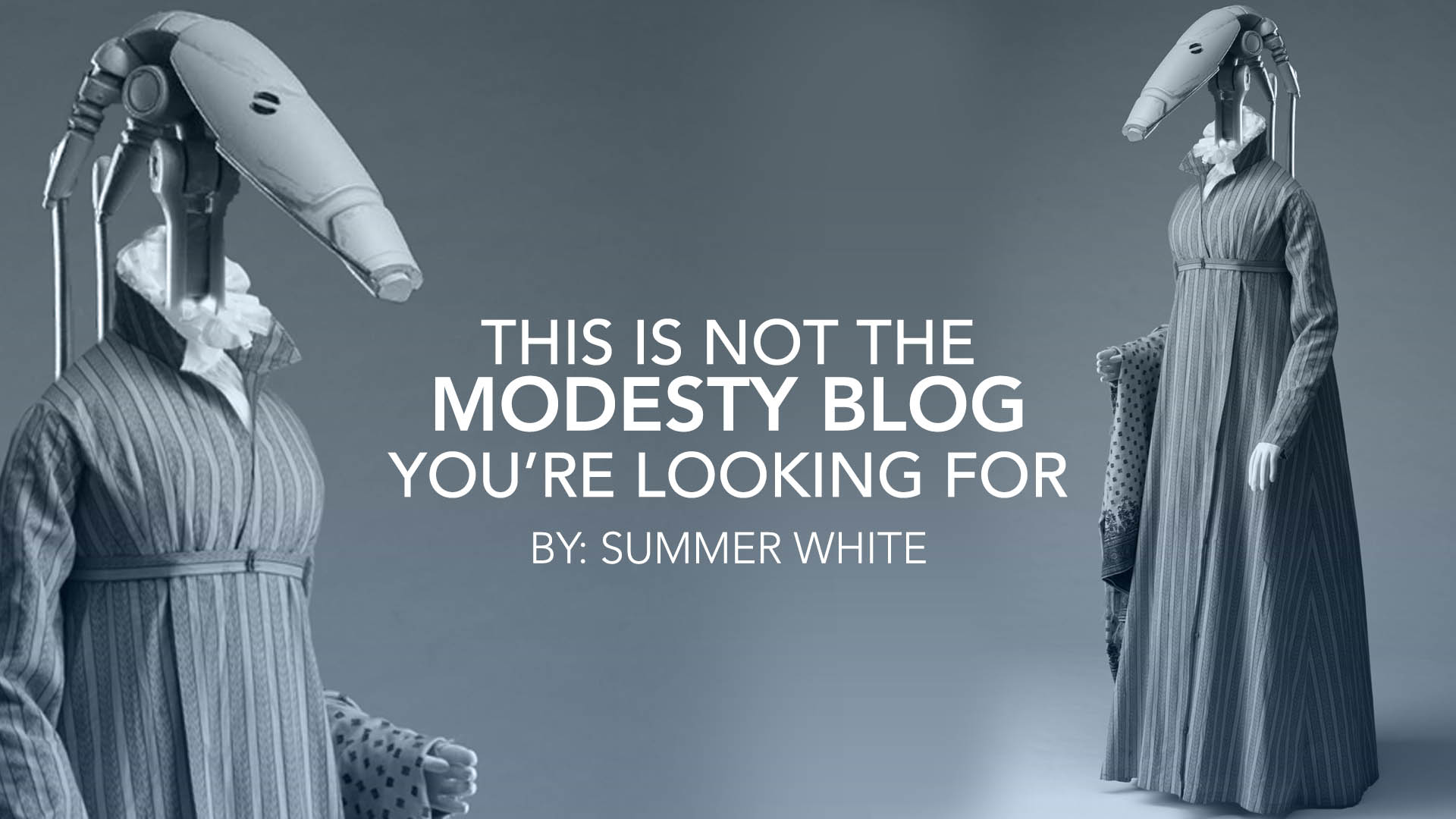 One time, my best friend and I decided we were going to do a podcast together. Our target audience would be women, and we made a blood oath never to discuss three things: [name redacted], modesty, and [topic redacted]. I figure this isn’t our podcast, so she’ll forgive me. And mostly, I’m only writing this because twenty-four people have inboxed me in the last two weeks and ask that we touch on the subject.

The entirety of my thoughts on modesty is this: be modest.

But of course we’re a podcast for women! So people want us to talk about….clothes?

It’s funny, you know, how women so often want a seat at the theological table, or feel as if they aren’t even offered one to begin with, and then two women get microphones and the requests for a discussion about clothing come rolling in. Now, lest you think that I find this a lowly request, it’s not that my feelings are negative regarding the topic per se, I just can’t miss a chance to point out the irony. Further, the topic has been discussed and dissected ad nauseam. Brilliant theologians and wonderful, godly women have had much to say on the topic that is well-worth reading, thinking about, and living out. There is no gap for me to fill.

My ultimate conviction about modesty is that—and I’m willing to bet on this—the majority of women who are concerned with glorifying God in all aspects of their lives are already dressing modestly. I’m willing to cast a vote that says that women who have bothered themselves with studying, say, the Trinity, are convicted of Reformed theology, have an idea what they believe regarding eschatology, have taken the time to study baptism, can define the atonement, etc., you get the idea, are probably not the ones that feel lost when it comes to whether or not they should dress a certain way. That’s not to say that they are without flaw, but that one thing typically follows the other.

Knowing how to dress modestly is not the result of theological gymnastics or drawing a clear line from a text of Scripture. Dressing modestly is the outpouring of an understanding and commitment to honoring God. So many fudge on this topic, or feel uncomfortable with it, sometimes (or often?) because they have a bone to pick with sisters that don’t meet their personal standards or because they grew up in a setting where modesty was how many inches their skirt went past their fingertips. Frankly, if you think that’s what modesty is, then you are a part of the modesty problem in the church. If you think that modesty is only about the amount of skin you cover, even if you’re covered by today’s standards, the Puritans would still be blushing.

But we don’t like that, do we? We’re perfectly happy as Reformed folk to affirm the doctrine of the Trinity, even though the word “trinity” never appears in Scripture. We’re perfectly comfortable with plenty of systems of belief that aren’t spelled out for us in simple formulas, because the whole of Scripture testifies to their truth, but suddenly we have to determine from the whole of Scripture how we should dress and we’re lost. Some of us then do the worst thing possible, which is create our own personal standards and hold others to them—only in our heads though, because we would never walk up to a lady at church and let her know that her legging/tunic combo is unbiblical. We’ll just think it and be so thankful that at least we understand what qualifies as “respectable apparel” in 1 Timothy 2:9.

This is where you must indulge this old gal a moment to reminisce. I went to a private school once, and I distinctly remember the first time I witnessed a teacher approach a female student with a ruler. She made the student stand still while she measured how many inches were between the hem of the girl’s skirt and her knee. Now, I’m all for rules, and in case you’re unsure I am absolutely of the conviction that Christian women have a duty to dress modestly, but this student was a few centimeters short of the “two inch rule”, and she was sent to the office. I can’t help but wonder what she learned about holiness that day.

Maybe it seems a bit heavy handed to bring up serious, first-order doctrine in a discussion about clothing, but I am unsure how they can’t be related. Show me the woman who is serious about doctrine and I’ll bet she’s dressing modestly. Not all of us will like her style of dress. Maybe she has one too many ankle-length jean skirts in her closet or maybe she has a penchant for dying her hair a color you’re not a fan of. Maybe she wears too much makeup for your taste or maybe she doesn’t wear makeup at all and you’re unsure if you should have calmed down on the highlighting and contouring before you showed up to her birthday party. I don’t know. None of that matters. This woman that has honored God with her time by studying Scripture, by being a servant in her church, by loving her husband and children, by working to the glory of God, she’s not confused about her closet. Sure, she probably has moments like the rest of us when she’s frustrated at the store, because nothing seems to fit well and the way they cut clothes for women nowadays is appalling. But she’ll figure it out. Her goal will be to dress attractively, but not seductively. She’ll cover up without being frumpy (that’s the hardest part, isn’t it?).

I’m sympathetic. I’m a female, too, and yes, choosing clothes at the store can be difficult. But let’s not over-complicate the matter. Love God, love neighbor. Does that skirt you’re wearing bring honor to God? Wear it. Can you wear that shirt and love your neighbor? Wear it.

More than anything, let’s lay down our rolling pins the next time we see a sister whose clothing style we aren’t fans of. You want to encourage a sister in dressing modestly? Teach her how to love God. Come alongside her and talk about holiness. Study the Word with her. Focus on discipleship. You’ll be amazed to see just how quickly those first-order issues trickle down in to the smaller details of her life.