On Moral Lessons from Apostates

I have had a few people ask me to discuss with them the flaws in Rachel Held Evan’s argument for voting for Hilary Clinton. Enough people asked me for this that for a few confusing moments, I lost my mind/hadn’t had enough coffee to consider that perhaps there were compelling arguments for voting for Hilary Clinton that I had never thought of. Perhaps I should go line by line and respond to what she was saying and maybe that would be helpful, but the more I waded through her utterly unbiblical case for putting lovers of baby murder in power, I became convicted that it would be completely irresponsible to give voice to such foolishness.

If you’re unsure how to respond to those who espouse nuance in regards to baby murder, try this: dismiss them outright and take absolutely no moral lessons from people who advocate for the murder of babies. Perhaps my detractors would have something to say about this overly simplistic view and liken my intelligence to a neanderthal holding a club. To that I say that I prefer this club to the kind that rips the heads off little children and has the audacity to claim nuance or moral superiority.

Evans attempts to paint a picture of abortion-hating pro-choicers, who agree that it’s morally wrong but just want to do the right thing for women who are somehow victims of pregnancy. She toes the party line in regards to Planned Parenthood just wanting to “help” women. She’s a social justice crusader who promotes anything other than what it is actually just, all for the sake of her perverted understanding of what “love” is.

I’d perhaps attribute her oversight in her love for Clinton to a deep and abiding to dislike for Trump (that I largely agree with, by the way), except that, y’all, have you forgotten? We are talking about the Obama-appointed member of the “Advisory Council on Faith-Based and Neighborhood Partnerships”. If an Obama-appointed advisor voting for Clinton this year surprises you, I don’t think you’ve been paying attention.

We aren’t dealing with an evangelical powerhouse here. We aren’t even dealing with anything resembling an evangelical (not that I find the word “evangelical” delineates much anymore). Let’s cut to the chase: Evans despises the Gospel. She’s made money off of books mocking Biblical Christianity and few things seem to make her heart leap more than a man dressed as a woman behind the pulpit. And we are unsure whether or not she has sound political and moral advice to give?

Maybe you’re thinking, “This doesn’t help me respond to my friends who agree with what she’s saying.” But friend, there is no need to respond to the vote for a pro-choice candidate. Either you agree with baby murder, or you don’t. Please see this: Evans argument for a Clinton presidency is as solid as arguing for a Hitler administration because he also had great economic policies and seemed sympathetic to the poor. Sure, he may brutally wipe out millions, but he is so, so qualified to speak to other issues. That is her argument. Don’t fall for the smoke and mirrors and the emotional discussions of social justice. There is no justice to be found in baby murder. There is no justice to be found in the administration of a criminal like Clinton. If comparisons to Hitler make you rolls your eyes, fine, but we are in the midst of a holocaust that has taken the lives of more unborn children than Jews that died in the second World War. The lives Hitler claimed numerically pale in comparison. If perhaps this is news to you, please wake up.

Evans argument can only be difficult to overcome if you have been softened toward the reality of what abortion is. Clinton isn’t just FOR abortion, she is agains 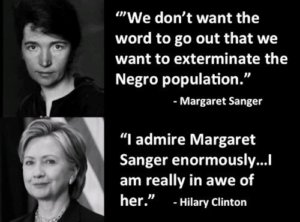 t your right to be against abortion. Evans attempts to convince us that the abortion rate would be lower under Clinton because Clinton cares about social justice, but Clinton wouldn’t even own that claim. Clinton’s goal is to make abortion widespread and even more available, and she is unabashed about it. It’s absolutely absurd to hold to a position that Clinton would be anything other than a crusader for fewer and fewer restrictions. She said herself that she would never appoint anyone who is pro-life.

More and more is coming to light about the utter corruption of the Clinton’s. The leaked DNC emails are a hall of shame of racism and other villainy. And yet we have liberal Christians defending the Clinton’s in the name of what? Social justice? Justice for who, exactly? Even better, justice as DEFINED by who?

I’m not here because I think a case can be made against Clinton and FOR Trump. There is no case for voting for Trump, in my opinion. My case is that no Christian should take seriously the moral outrage of anyone who finds nuance in abortion. Do not give up that ground. There is no argument for abortion that does not reduce you to utter insanity, and all the clever dialogue in the world cannot change that. Don’t get it muddled. Evans, or anyone advocating for LGBT “rights”, should hold no moral concern over you. That she would now introduce political nuance in to baby murder should not surprise you. She came on the scene with her book “A Year of Biblical Womanhood”, which is a glibly written expose of her absolute disdain for God’s law. Her entire public life is an effort to thwart Christianity that holds Scripture as its absolute authority, regardless of our feelings or emotions or political climates. If you take Evans seriously, and do not recognize her for what she is and where her presuppositions come from, you are on dangerous ground.

I often hear women talk about how “nice” Hilary Clinton seems, and how much they appreciate the “tone” of Evans. Frankly, ladies, you should be much more concerned with actions and application than with how “kind” someone seems behind a camera or a keyboard. I agree that they both have this in common: they are wolves in sheep’s clothing. Be the kind of sheep that can decipher such things.

If you are unsure how to discuss abortion with your friends and family, go here and here.