Why America Voted for a Sitcom Dad 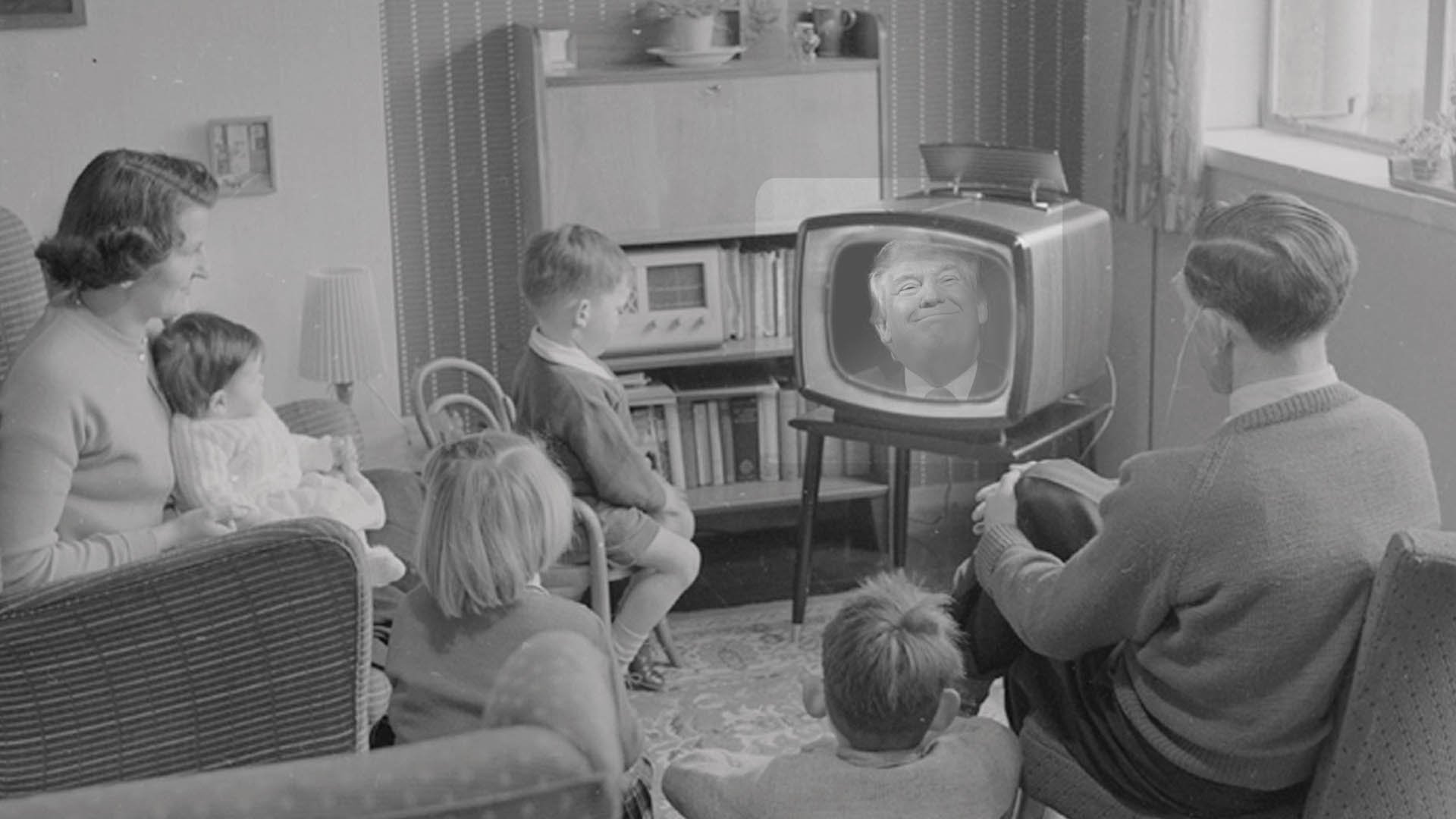 This week, reality show super star Donald Trump was elected President of the United States to the shock and horror of feminists (and decent women) everywhere. But how did we get here? How did a real-life version of a sitcom dad get elected to the highest, most respected position in the United States? Let’s take a walk down the television dad Hall of Fame to find out.

America has had its fair share of TV dads. Some of the best include Ward Cleaver, Andy Griffith, and Cliff Huxtable; some of the worst include Ricky Ricardo, and Ralph Kramden. Ralph Kramden was abusive to Alice in The Honeymooners, and Ricky imprisoned Lucy in the home, even before he had children. Very few television fathers even disciplined their children properly. Andy Griffith was one of the few fathers who openly threatened his child with spankings and we all know the “damage” that caused him, because poor little Opie became a successful Oscar winning filmmaker. 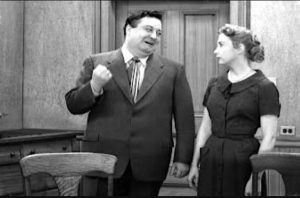 One of these day’s Alice…

Television history has long struggled portraying a Biblical view of family accurately. On one hand, you can have a great television father, but oftentimes the father is joined together in television matrimony with a wife on the opposite end of the sanity spectrum.

Ward Cleaver commanded the respect of his children just by talking to them in a stern voice, but Ward was married to such a caricature of 1950’s Campbell’s soup perfection (who was Leave it to Beaver’s sponsor) that she single-handedly became the poster girl for the entire modern Feminist movement.

But these are fictional characters. They are not to be taken seriously. After all, I Love Lucy was obviously satire on the American housewife, as was Ralph Kramden a satire of the American husband. These false ideas of being a wife and mother became functional saviors that were impossible to live up too, and also undesirable. No woman truly desires such a mundane life of fainting on the couch, watching soaps, and microwaving soup meals.

Julia Child became a famous chef during the sixties because she told people that cooking wasn’t a skill that could be mastered by reading a microwave instruction manual, she taught that it was an acquired skill that took years of mastery. Her book, The Art of French Cooking was considered unpublishable because of how hard it was to master.

We must accept the fact that this may well be a book unacceptable to any publisher, as it requires work on the part of the reader…In fact it does indicate that we’re not presenting things in a popular manner. I am frankly not interested in the chauffeur— den mother type of cooking, as we have enough of it. – Source

But once it was published, women were rightfully emboldened to work hard and challenge themselves. Her books sold out everywhere and on the day her television show The French Chef aired, grocery stores were unable to keep the required ingredients for that show’s episode on the shelf. Women found joy and meaning in working hard and laboring again.

Unable to shake the reputation of the sitcom housewife, television took a dramatic shift in the opposite direction. Sitcom creators decided to create more realistic, yet fictional programming about women. As a result, television attempted to create new realities, and programming became reflections of this new, progressive ideal.

The biggest consequence of this over-correction was that the sexual revolution became mainstream. In 1972 on the TV show Maude (Played by Golden Girls actress Bea Arthur), Maude, at the age of 47, received an abortion. The episode was watched by 65 million people and just one year later the Supreme Court legalized abortion.

As feminism and sexuality became societal norms, so did the lack of two-parent homes. Mary Tyler Moore revolutionized the idea of the single-dating-working woman. The networks told Mary Tyler Moore. “America[n] audiences won’t tolerate divorce in a series’ lead any more than they will tolerate Jews, people with mustaches, and people who live in New York.” The same was true for Carol Brady on the Brady Bunch—Mike was a widow, but Carol’s previous marriage is never addressed as a means to avoid the issue.

But it didn’t take long before networks gave in and eventually Frasier got married and divorced on Cheers in the eighties.

Cliff Huxtable was arguably one of the best television fathers in history (completely unlike the actor who played him). But unfortunately he was married to Claire Huxtable, and unlike June Cleaver, Claire was a strong female leader who abandoned most of the parenting responsibilities to her husband for the sake of her own career. Though Cliff was a doctor, his office was downstairs, making him essentially a stay-at-home dad while Claire went through law school.

Television came alongside and helped fuel the Sexual Revolution, so it’s not surprising that the list of great television fathers is shorter than great feminist women because the men left as soon as feminism came in. The strong, hard-working father that television was known for in its infancy became competition to the ideologies of feminism by the time TV was a toddler. Thus early on, sitcoms couldn’t portray men as strong leaders anymore.

But television didn’t remain merely scripted entertainment. In May of 2000, Mark Brunette’s Survivor created an insane hunger for low cost, high ratings entertainment. There was no need to pay actors millions of dollars per season to play a fictional character when you can just hire anyone off the street with a genuine sitcom personality to play his or her actual self. They called it “Reality TV.” This concept was so lucrative to major networks that within a few years, every network was sweeping multiple reality shows. The cost of one failing was cheaper than a scripted series and offered a much larger return. American Idol created a competition for fame and a love for brutal, unrelenting honesty. Who Want’s to Marry a Millionaire glamorized wealthy playboys, and then The Apprentice, starring Donald Trump, combined it all. Competition, brutal honesty, luxury, power and wealth—Donald Trump’s popularity skyrocketed, resulting in his seeming legitimacy to the nation.

From Gordon Ramsey and Donald Trump to Simon Cowell, what sitcom’s earlier fictionalized as “men”, reality television made actuality. The progression was only natural. These shows spanned every major network for more than a decade.

But the thought of Donald Trump ever being president was only the subject of celebrity journalists and one prophetic episode of The Simpsons. But what the writers for The Simpsons thought of as a joke ten years ago, became reality this year.

President Trump is the natural progression of male sitcom and cartoon buffoonery becoming real life buffoonery. The entire nation was in love with abusive, loud, and obnoxious men. Al Bundy, Homer Simpson, and Peter Griffen proudly carried the flag in their fictional universes, unknowingly paving the road for 2016.

It was only a year and a half ago that the only acceptable response to hearing that Donald Trump is running for office would have been to ask why the elevator in Trump Tower was broken. After all, Donald Trump was just a real life version of a television sitcom dad.

This summer I had dinner with a friend in the film and television industry, and he looked at me with a straight face and said, “Gordon Ramsey gave us Donald Trump, and he WILL be President.” I laughed at him, and he said it again, this time peering into my soul. “Donald Trump will not just be the GOP nominee, he WILL BE the President.” Struck by his seriousness, I asked him, “What makes you say that?” He then went on to tell me that it is impossible to have a massive television hit like Kitchen Nightmares, Hell’s Kitchen, or The Apprentice without gaining the following of middle-American audiences and likewise, you can’t win the presidency without the vote of middle-America. Donald Trump had the loyalty of this demographic for over a decade on network television.

Long ago, television dinners replaced family time, and the entrance of the TV into the home let a horrific worldview few actually held to gain mainstream credibility. Suddenly divorce, homosexuality and single parenting jumped out of the television and into everyday life. This meant that the only idea of a father children had was what the television created for them. Millions of children without functional families looked not to the Scriptures for the definition of a family, but to their screens. Thus television not only created and encouraged fatherless homes, it created the very notion of what a father was. The result is a generation of people who don’t know what Biblical leadership and strength looks like, outside of what Hollywood has gifted to them and Donald Trump came to us gift-wrapped, with a bow.

The unbiblical view of men portrayed on television every single night to millions of homes and the thunderous applause of feminists resulted in the materializing of their own worst nightmare. They romanticized perpetual singleness on shows like Friends; egalitarianism in Mary Tyler Moore; homosexuality from Ellen. Feminists applauded commitment-free promiscuity on Sex and the City. All of this means that the only strong male leader that most children ever knew were the ones that feminism created with their own television propaganda. Donald Trump is not just some random anomaly, he is the very creation of feminist ideals over the long history of television. So when America is in desperate need of leadership and strength, America looked on their televisions and saw Donald J. Trump. Feminist’s birthed him and America made him President, because after all, Father Knows Best.